One of the things that a lot of people need in their game room is controlled lighting.  It can come in very handy whether you’re watching TV, playing pinball, etc.

There are a variety of different dimmers on the market, but in general the most popular ones are made by Lutron.  In my home theater, I installed 4 of the infrared controlled 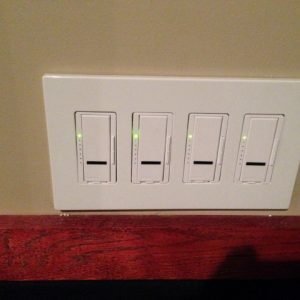 dimmers to control my different lighting sections.  The only downside is that you basically need some sort of smart remote if you have more than one of the dimmers, as the remote that comes with it will control all of the switches at once (instead of independently).  I bought a Harmony 650 remote to control the switches.

I have a picture from my home theater at the right.  The presets are what you use in order to come up with the lighting sets you want.  I have mine set to turn off the main lights and just have the side lights on, works great when trying to watch the screen and you need a little light.

I found this sign at a local festival today.  It was $60, which I thought was a pretty good price considering how large it is.

They had quite a bit of stuff from signs to light switch covers to rain gauges.  If you have a favorite college team and have been looking for a sign, you can’t go wrong with Swen.  I was also going to order some light switch covers but they didn’t have the double ones with them at the festival.

How much does a pinball machine weigh?

One of the questions that gets asked a lot is, “How much does a pinball machine weigh?”.  For most of the games of the games from the 80’s to today, games weigh around 250 pounds.  There are a few exceptions to that though.  Widebody games from 90’s (Twilight Zone, Star Trek The Next Generation, etc) weight close to 300 pounds, and Pinball 2000 games weigh almost 350 pounds.  The new games from Jersey Jack Pinball are very heavy as well, with Wizard of Oz weighing in a 310 pounds and The Hobbit weighing in at 350 pounds.  If you’re buying older EM games, bad news, they’re very heavy as well with some of them pushing 300 or more pounds.  Four player EM games are especially heavy, the two additional reels in the backbox make it especially heavy.

A lot of people try to move pinball machines by picking up both ends (without the legs on) and carrying it like a heavy box up and down stairs.  That works but it’s very heavy to do that.  A much easier way is to use a dolly to move it up and down the stairs.  You’ll still need two people, but it’s much easier to manage the weight.  If it has the legs on, furniture movers also work for sliding it around.  Also if the game is older and the head removes easy, I highly recommend doing that to save your back.

If you’re trying to move it yourself, another option is a stair climbing dolly, which is why I own.  I own this model:

It’s a life saver if you move very many games up and down stairs.  Probably the best money I’ve ever spent in the pinball hobby (got it off craigslist).  With that, you can move a game by yourself pretty easily as long as you take your time and have adequate upper body strength.  If you decide you want to buy one of these in the future, I’ve worked a special deal where if you use my referral code (122212) they’ll give you a free accessory (up to $200) with your order.  I thought that was a pretty sweet win-win scenario.

When I first built my game room, I used a ton of can lighting.  I think in the 1400 sq ft I finished, I had almost 50 can lights.  That produced great lighting effects, but it had two particularly bad side effects, heat and cost of running the lights.

As a result, any time I’d have people over for a party, my basement would inevitably heat up higher and higher due to the lights.  I tried CFL’s, but those burned out rapidly (although they were supposed to last a long time).  Plus they were more expensive without much benefit.

Finally technology saved me last year, with LED lights finally becoming affordable enough to put into my basement.  I ordered a bunch from Amazon and started replacing the existing bulbs.  WHAT A DIFFERENCE!  Low heat, instant on, better lighting, etc.  No disadvantages at all other than the initial cost.

After the game room experiment, we replaced all of our lights with LED’s.  Never changing a bulb for 20 years is pretty appealing besides all the other advantages.

Here’s a link to some of the bulbs I ordered:

Second day with a post, sure I won’t keep up that pace.  🙂  In any case, I thought that I touch on something every basement or game room needs, furniture.  And in this case, home theater recliners are the subject.  At stores, a row of three chairs is usually going to cost $1500 to $2000, depending on the brand.  Those same chairs though can be picked up used for like 1/3 of the price off craigslist.  Unlike other furniture people have that they sell, home theater chairs are often in stellar shape, as people often buy them and then never use them (kind of like workout equipment).  As far as what I’d buy, you’re going to have to see what’s available first, often you don’t have much choice.  If you’re lucky, one with the right color and configuration will be available.

If you haven’t sat in very many home theater chairs, there are a couple things to keep in mind.  First, if you’re tall, the back may not support your head or feet very well.  Some models are also pretty narrow, so they’re not very comfortable for some adults.  My favorite chairs are the Berkline 90’s that they used to make before they went out of business.  Lane tried to duplicate the model later but it didn’t really turn out right unfortunately, the originals were far superior (I had both at the same time, and the Berklines were way more comfortable).

Last thing to take note of is there are a lot of really cheap chairs out there, some of which aren’t the greatest.  Might also be hard to find parts for some brands (although what are the chances that a chair will break).  I would try stick with names you’re familiar with unless you come across some really great deal.