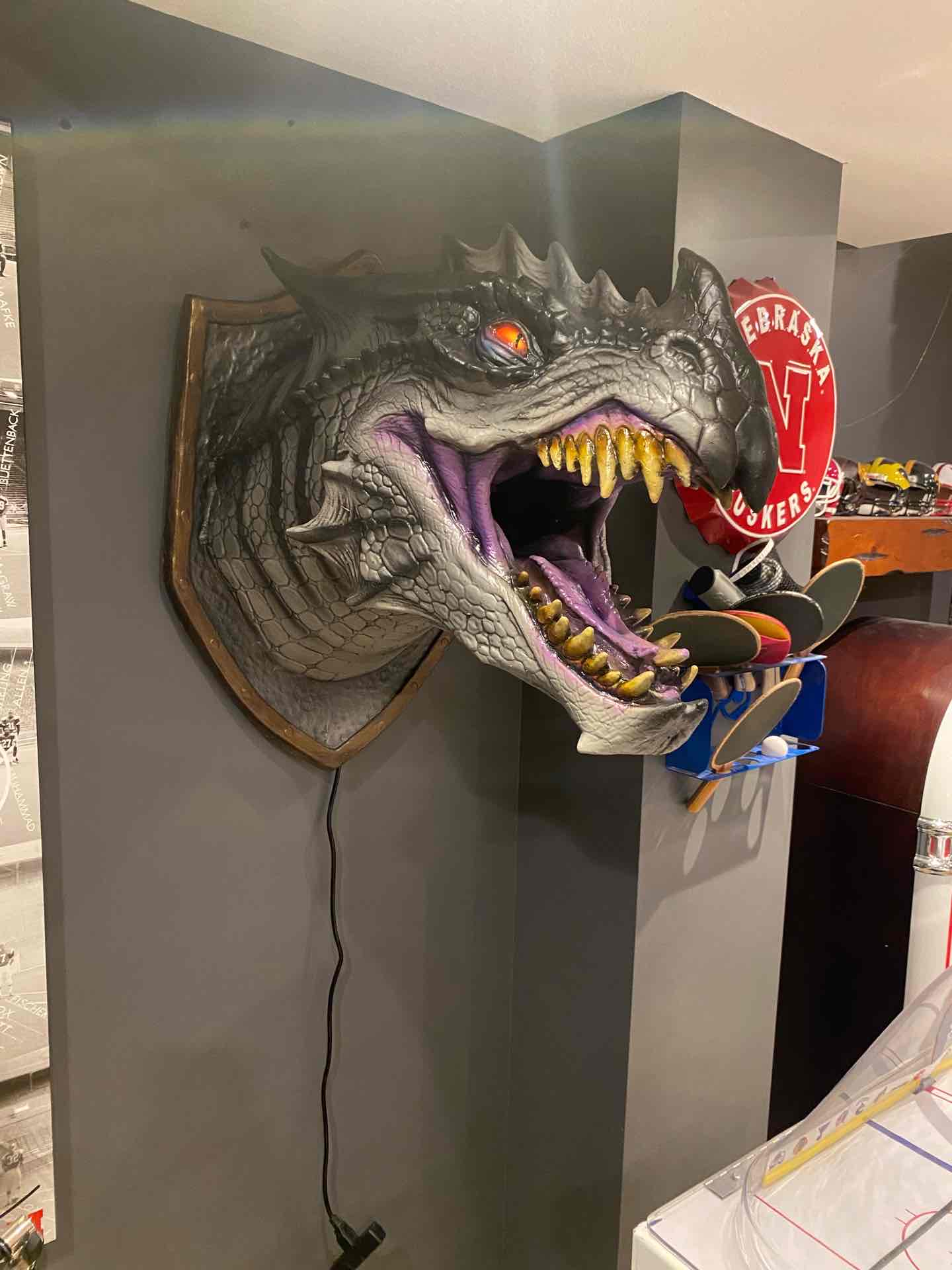 Every once in a while you run across something for your game room that you’re woah, that is so cool, I’ve got to have that.  Well the dragon head from Distortions Unlimited is just that, pretty much the coolest thing you can add to your game room or bar.  After I saw it at a friends house this summer, I had to have one for my own house.

The Dragon head comes in 6 or 7 different colors, I choose black because in most video games the black dragon is the most powerful (plus I thought it looked the best).  I took a video of it below:

You can see it really does produce an awesome effect.  It looks heavy, right?  Actually the dragon head is just made of foam, so it’s really light.  You wouldn’t want your cat or dog to get ahold of it, they might rip it to shreds.  Inside the dragon head there’s a mount for both the head and the fog machine which produces the light and the smoke for the dragon.

One thing to note with the fog machine, when you assemble the dragon head you’re going to probably turn on the fog machine permanently, which means you have to unplug the head after every use pretty much.  This wasn’t immediately clear to me the first time (like I thought I was turning it on by remote) but it stays on as long as it’s plugged in.

The remote (pictured below) can do a large variety of colors and effects.  I mostly like the red light, but the strobing effect is pretty cool too.
The setup comes with a small amount of fog juice.  I don’t know how fast it goes through it as I’m still on my first amount, but I’m guessing that having some on hand would be good.   I’ll probably buy some off Amazon.
My teenage son thinks it’s the coolest thing ever, so I feel that’s a good metric to determine how cool it really is.  Impresses teenagers?  Must be good, lol.

Is it worth $500?  If you don’t have other stuff in your game room to play already, then probably not.  If you’ve got a ton of money already invested in your basement, then most definitely it’s a cool item to have for parties.  You’re almost guaranteed that nobody has seen anything like it before, and thing in itself makes it very cool.

Shuffleboard on the ground

Game Room Info is a site to help people develop their home game rooms that maximize space and minimize cost. Anything from pinball machines to home theater will be covered here.
Contact us: gameroominfo@gmail.com
© Newspaper WordPress Theme by TagDiv
MORE STORIES
Uncategorized

gameroominfo - January 24, 2022
0
Are you in need of a laptop that can do both gaming and everyday tasks? This fall I was really searching...
Uncategorized

Shuffleboard on the ground

gameroominfo - July 22, 2018
0
When most people think shuffleboard, they think of those long shuffleboard tables that are often in bars or basements.  The other kind of shuffleboard...