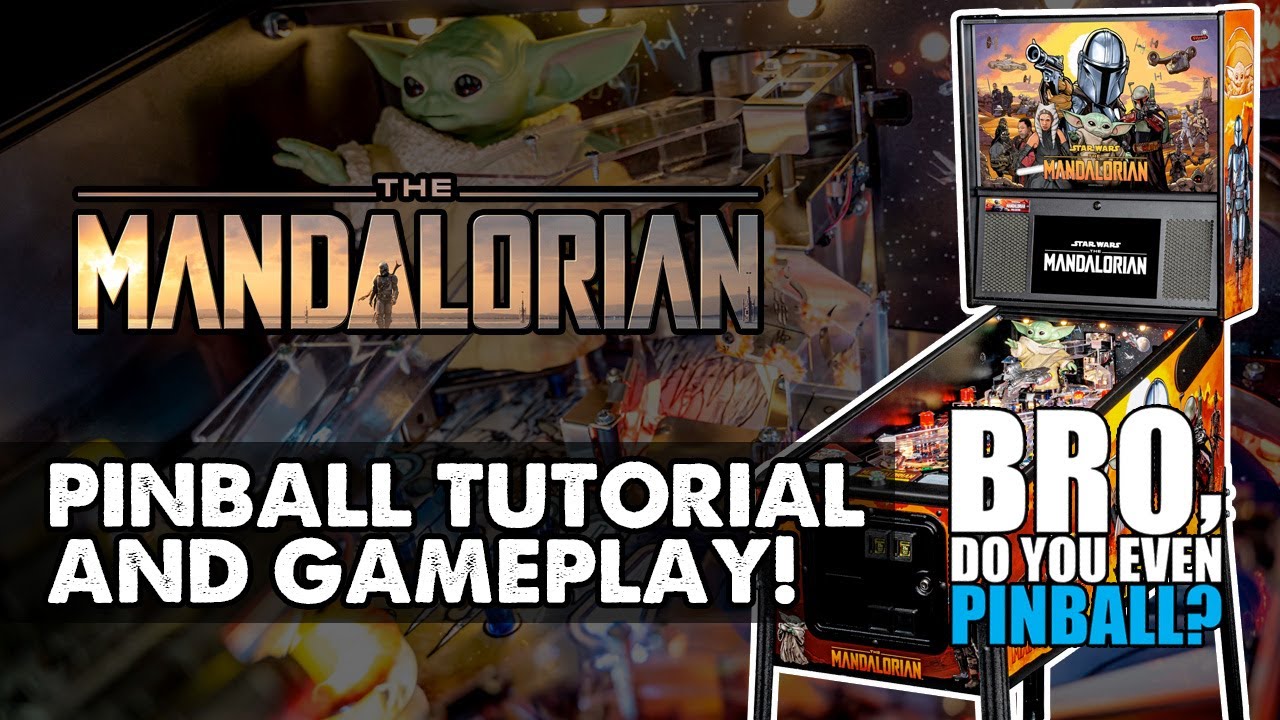 Stern’s new pinball machine The Mandalorian is one of the best games to come out in the past few years. Featuring Pro, Premium models, and a Limited Edition models, the pinball machine has models for every price level. I bought a premium myself, most games I go with the pro (as I did with Iron Maiden and Avengers Infinity Quest) but for The Mandalorian I went with the premium due to the upper playfield tilting on it and making it more interactive.

The Mandalorian Pinball Machine is available at a bunch of dealers and possibly used. I recommend buying it from Home Arcade here:

They’re usually cheaper than most dealers and are good with shipping. I myself bought my game used off location where it was being used in a bar. Was a little dirty with some broken pieces, but I’ve got it back going again.

The Playfield and Gameplay

At first glance, the Brian Eddy designed playfield of The Mandalorian seems pretty tight up close. There’s a scoop on the left, the horseshoe scoop ramp, the center ramp shot, the right ramp shot, and then the loops and some stand-up targets. Once you play it and get it rolling, you’ll find that the shots get easier and you can really combo the playfield well. Initially though the shots are tight. On my particular game, the cover over the right ramp was broke so I had to 3d print another one in order to get the ramp to work correctly.

The hand-drawn artwork is really good, both on the cabinet and on the playfield. They did a really good job of capturing the feel of the show. Randy Martinez is the one who did it.

Baby Yoda (Grogu) is in the back left corner. It’s proclaimed as a large custom sculpture of Grogu but it’s really just an off the shelf toy type of thing. In fact there are people who have modded the Groku to close his eyes and move his arms when the magnet is activated.

There a 5 different modes from the first two season of the show, each dealing with a big event in the story line. Most require about 6 or 7 shots it seems, usually in different orders. None of the modes are particularly difficult, and most are best accomplished by stacking a multiball on top of it. All of the modes feature video clips and get you closer to the wizard mode. Dwight Sullivan did the code on the game and did a great job.

Beskar Armor is something you collect around the playfield during various submodes where you act as a Bounty Hunter. You can use it to buy things like extra ball saver, and extra ball, shot doubling, etc.

I bought a shaker motor for the game, it adds a lot to the game. Highly recommended if you buy the game. They also make art blades and custom side armor.

Normally I don’t care much for upper playfields, but the upper mini-playfield of The Mandalorian is actually really fun with the full-size flippers. It actually measures how accurate you are and rewards you based upon that. It takes repeatable precision to score well up there. I’m not particularly good at yet unfortunately.

There are three main multiballs that are all rather fun to play. You start them by hitting the center shot with the Razor Crest ship a certain number of times. All three of them are pretty fun, and luckily they are random so you don’t play the same one every game. Each of them features a different story of The Mandalorian.

In addition to the modes and multiballs, there are three different levels for the upper playfield to play through to get to the mini wizard mode there. I don’t usually focus on the mini-playfield so I’ve never made it there unfortunately.

If you like multipliers, the Boba Fett drop targets on the right can 1x, 2x, up to 5x your scoring. That can lead to some huge scores between the modes and multiballs.

Actor Carl Weathers (Greef Karga) from the show provides exclusive custom speech for the game. I most recognize him from the Rocky movies and Happy Gilmore as Chubbs. In any case, he does a good job for the most part, sometimes his tone is a little off, but good overall. There are a lot of quotes and authentic video scenes from the show that add a lot to the game, mainly associated with the multiballs and 5 modes. The display and sound integration for the theme are pretty top notch in my opinion, especially after owning Avengers Infinity Quest and it being lacking in those areas. I’m glad that Gary Stern, CEO of Stern Pinball made the decision to go to a much better display and sound system about 5 years ago. By 2015 their old system was feeling very dated, their new system now makes all older games seem very outdated.

I added an extra subwoofer to my premium game but with the shaker I’m not sure it’s necessary, the included speakers are pretty good. Limited-edition machines come with the same speakers so they’d be ok too, not sure if the pro has the same speakers or not but they’re probably good enough. On older Stern’s replacing the cabinet speaker was a must, doesn’t seem like that’s necessary anymore.

I’ve played a lot of the newer Stern games, and this is the third one I have bought. I bought it after playing Godzilla, Jurassic Park, Black Knight, etc, I just thought that the theme integration and fun factor was just better on this game than the others. The reasons why I would pick it over similar Sterns:

It has great theme integration. So many of the Sterns are lacking in the sound and visual departments due to lack of assests.

It shoots really well, and I love the Star Wars galaxy.

It’s not designed like anything, so many games today are standard fan layouts.

It’s just a fun game that’s challenging but not over the top hard or long to play like many new machines.

If you’re having issues deciding between the models, here’s a video that shows the differences:

Intro to Pinball Class now online and other pinball learning

gameroominfo -
0
I finally finished a project I've been working on for a while, I've got the initial version of my intro to pinball class up...
Pinball

gameroominfo -
0
There's no doubt about it, when it comes to the best collectible pinball machines, Williams is the gold standard to which all others are...