Game Room Info
Home Pinball Lord of the Rings Pinball Machine Review
Facebook
Twitter
Google+
Pinterest
WhatsApp
Welcome to my Lord of the Rings pinball review.  If you’ve ever thought about owning a pinball machine, one of the ones that will be at the top of a lot of people’s lists will be the Lord of the Rings pinball machine.  Based upon the classic movie trilogy, the game features all the music, sounds, art, etc that everyone loved about the movies.  I first owned one about 10 years ago and recently bought one again because I’ve missed it for a long time.

Lord of the Rings Modes

What makes Lord of the Rings pinball one of the best?  The thing that usually catches everyone’s eye at first is the flying ramp shot up the middle.  This shot flies off the ramp at high speed into a magnetic ‘ring’ in the back center of the playfield.  There it sits suspended while the first of 6 modes starts.  The ‘modes’ are basically 6 different scenes from the movie, everything from Gandalf to the Witch King.  All of them feature speech from the movies along with great music.  The modes are:

If you can start all of the modes, you’re rewarded with the mini wizard mode There and Back Again, which is pretty awesome.  I won’t spoil anything for those that haven’t been there.

To go along with the modes, there are 3 main multiballs, one for each movie.  The Fellowship multiball is based up on getting them across the bridge before the Balrog catches them.  You start the multiball by collecting the 9 people involved in the Fellowship of the ring ( Pippin, Merry, Sam, Frodo, Aragorn, Gandalf, Gimli, Boromir, Legolas) by shooting their associated shot.  Boromir is typically the hardest to obtain due to needing 20 pops to qualify him.  Once you’ve collect the 9, you can shoot the left loop to Barad Dur to start the multiball.  Once in the multiball you have to shoot Balrog follow by a left or right ramp shot. This gets a member across the bridge.
The Two Towers multiball is about defending Helm’s deep while the orcs attack until Gandalf arrives.  To qualify it, you must lock three balls on Aragorn’s sword by spelling lock via the lanes.  It’s basically an “all shots are lit” multiball where every shot you hit continuously progresses you towards Gandalf arriving.  It’s the easiest of the three multiballs, once you get good at the game you will regularly be completing this multiball.
The Return of the King multiball is about climbing the 7 tiers of the city to the top to save everyone.  To qualify it, you have to collect 5000 souls from the path of the dead, which isn’t always easy.  You basically have to hit 4 core shots 7 times (28 shots total) in order to scale Minas Tirith to the top to save everyone.  This multiball is extremely difficult to complete, I’ve only done it a couple times.

Rest of the Rules

Anytime you complete a multiball or mode you are reward with a gift from the elves.  The gift is one of 6 different prizes on the left hand side in the shape of a 6 sliced pie.  There are a lot of good rewards so it pays to win them.
Here is the complete in depth ruleset:
Lord of the Rings Rulesheet

What are the drawbacks of the Lord of the Rings pinball machine?  The main drawback is that compared to other games, the games can become rather long as you get better and better at the game.  It’s not uncommon to have 30 to 40 minute games on it after you win a bunch of extra balls.  At the end of this time, sometimes the flippers become overheated and weak.  If that’s the case for you, consider installing these:
Special Lord of the Rings Flipper Coils
That’s really it though, if you like the theme it’s really a hard game to beat. 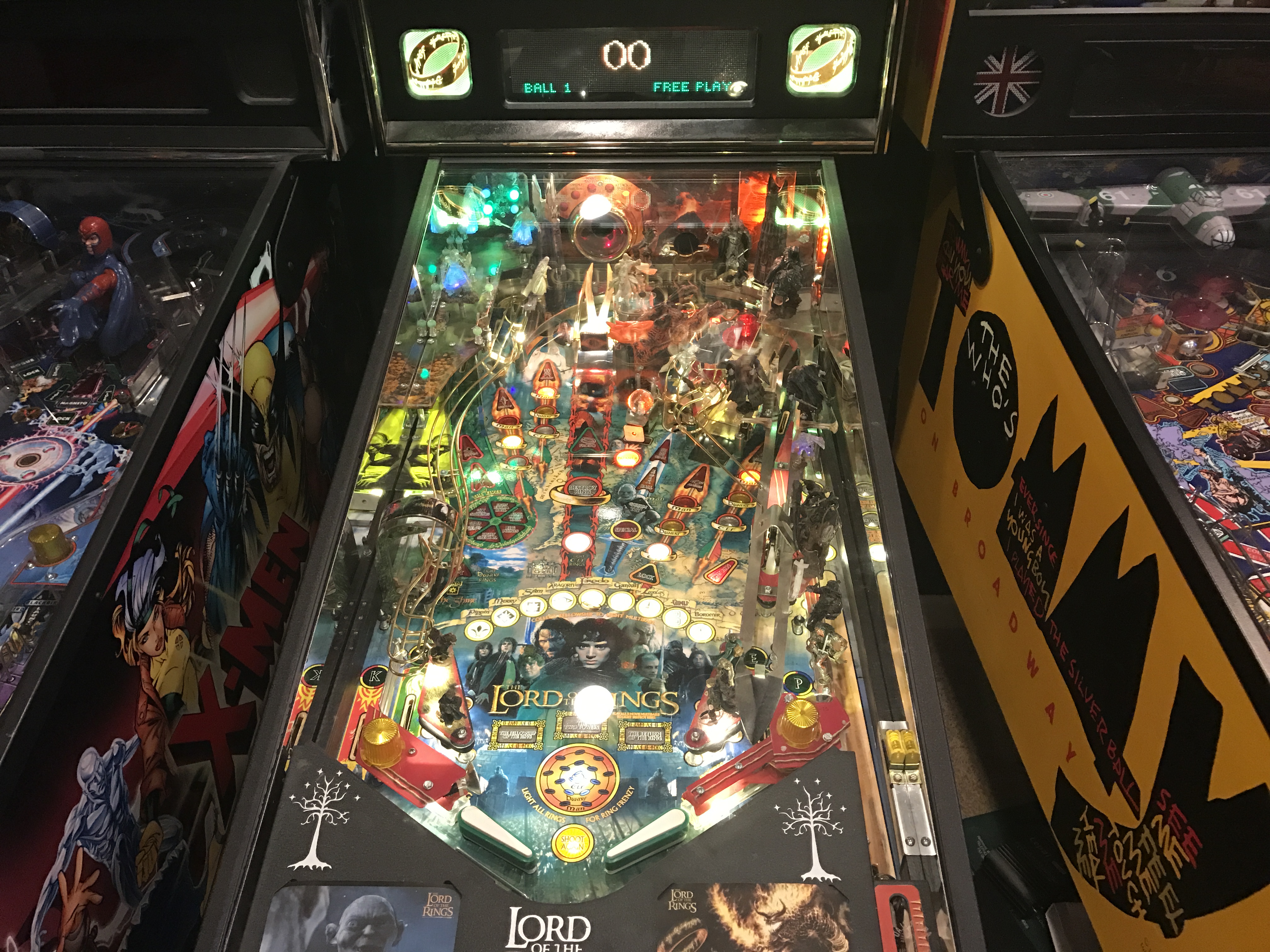 I’ve installed a Color LED display in my Lord of the Rings pinball machine.  Honestly though, I think I’m going to switch it out for a Color DMD, I don’t really care for the triangle dots, they’re too bright and spaced apart too far.  I wouldn’t recommend Color LED for this particular game, I don’t think the color scheme goes well with it.  I took a video of it below:
There are a bunch of other mods available for the game.  These are things like a shaker motor, path of the dead ghosts, a Palantir that looks like the eye, etc.  I personally don’t like too many mods on my games other than shakers and subwoofers.  This particular Lord of the Rings pinball machine I bought just happened to have a bunch of mods already installed when I got it.  I actually don’t mind the speaker rings, they do kind of go with the game pretty well.  I’d like to add a shaker motor at some point.
Lord of the Rings pinball also appears in my list, Best Pinball Machines for home use article.

Best Pinball Machines of the 90’s

gameroominfo - August 19, 2019
0
If you're not familiar with the original 1984 arcade in Springfield, MO, it's one of the best locations in the US to...
Pinball

gameroominfo - October 21, 2016
0
I was thinking about this as I was driving home today, what I would need if I was new to the hobby and wanted...