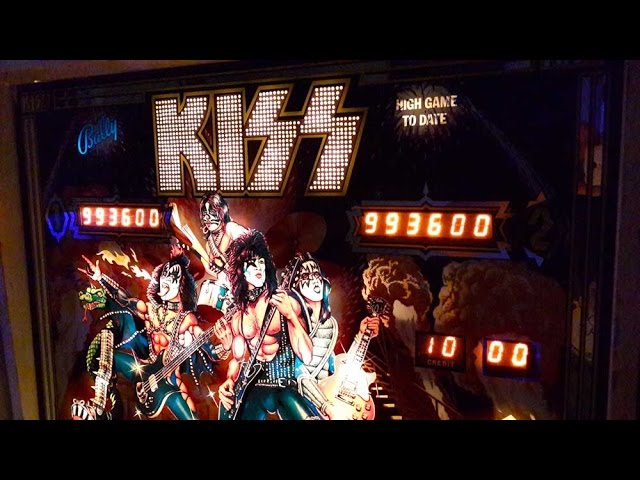 The 1970’s were one of the biggest decades for pinball, Eight Ball set the single machine sales record and multiple others got really close as games switched from mechanical to digital. I’ve got a list of the best pinball machines of that decade, a lot of them are pretty iconic. Luckily with the rebound in pinball popularity it’s a lot easier to find these games than it was 10 years ago.

KISS made by Bally is one of the most iconic games of the 70’s. With a fantastic art package, it’s immediately recognizable anywhere. The game itself isn’t quite as good as how it looks, but it’s still pretty fun. I owned one for a short while. The price on this one is quite high for restored examples, going for over $3000.

Just like KISS, Playboy is another iconic game from that era. The backglass with Hugh Hefner on it is pretty much perfect, and the game has a very cool vibe to it like KISS. Not the most kid friendly theme, but fun for everyone to play.

Fireball was the first pinball machine to have a multiball, a key feature in every modern multiball. That feature alone made it stand out from every other. Add in a killer art package that really stood out and you’ve got one of the best games from the 70’s. Multiball back in the EM days was a little slower than it is today where it can turn into a flail fest. Bally really outdid themselves with this game.

Eight ball was one of the first digital pinball machines. That combined with an easy to understand objectives made it a huge hit, the biggest pinball seller ever until Addams Family came around 15 years later. Another Bally game, back in the late 70’s Bally really took over the pinball world.

One of the best backglasses of all time, and one of the best early solid state games. I owned one for over a year, it’s a very hard game to master. Its basic goal is to try and build up the bonus to insane levels and then multiply that bonus through the inline drop targets on the left side. There’s also a pretty cool saucer at the top where you try and spell PARAGON for a free game.

Gottlieb used to be the gold standard as far as pinball manufacturers back in the 70’s before things shifted to digital. Gottlieb was slow to adopt the digital wave and unfortunately got way behind. Before that happened though, they made a lot of great games like El Dorado. El Dorado is one of the best drop target games, which made it really popular on location.

This one is one of my personal favorites as it centers around cards. Like El Dorado, this game has a ton of drop targets, a 2 bank, a 3 bank, a 4 bank, and a 5 bank of drop targets (poker hands). It’s really fun to try and complete banks of targets, and pretty challenging too. Gottlieb actually made both a digital and an EM version of the game. The EM version is very rare, if you find one for cheap you might want to jump on it.

One of the last EM games Gottlieb made, Centigrade 37 is a classic in most regards. It has a funky setup on the right side that I don’t think I’ve ever seen in a game, with double lanes going down the side. Definitely a unique layout, there’s a reason the game is the highest ranked 70’s game on Pinside.

One game that’s picked up a lot of popularity in recent years is Stern’s Stars. One of their first solid state games, Stars is a pretty challenging game and even uses chimes instead of electronic sounds. There was even a ruleset update made in 2020 to improve upon the game even more. This used to be the cheapest game on this list by far, but recent popularity has it climbing in price.

Jacks Open has one of the biggest drop banks you’ll ever see in a pinball machine. In the middle of the game, there’s a huge bank of targets to make poker hands with. It’s a game that requires accuracy and is very fun. It’s also very highly rated on Pinside, the biggest pinball site on the web right now.

Where can you play these games today?

If you’re looking to play some of these games today, I highly recommend using the pinballmap.com website. It usually tells you what games a location has so you can hopefully find a place near you that has some of these games. The Pinball Hall of Fame in Las Vegas is probably a place where you can see almost all of these games in action, they’ve got a ton of games there, mostly the older ones.

gameroominfo - October 7, 2017
0
One of the problems with pinball machines is that the technology that drives them is largely derived from 80's and 90's, meaning that things...
Pinball