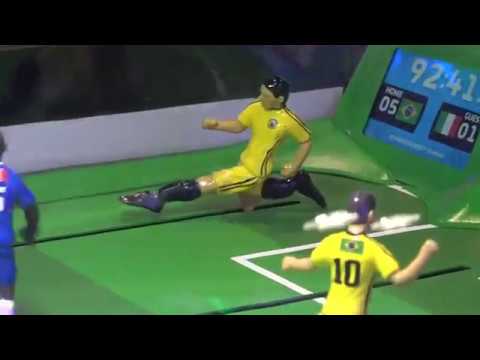 In 1984, ICE first tried to go beyond Hockey and Chexx to make a soccer game, Kixx soccer.  It was a mild success, but not enough to continue it.  Fast forward 35 years, ICE has decided to finally bring a new version of Kixx to sell.

Compared to the old version, the most obvious upgrades are to the sights and sounds on the new color screen.  Most of the surrounding plastics on the fields have gotten an upgrade as well.  Gone also is the turf from the earlier games, it’s now replaced by a flat green surface similar to the hockey games.  I think this is a big improvement in speeding up the game.

Also new are the dual LCD screens, one in each corner of the the field.  Instead of the overhead scoreboard, ICE put them in the corners.

To launch the ball, ICE added an elevator mechanism to bring the ball up to the field.

You can also order each game now with your favorite teams right off the bat.  Unfortunately, the game is also pretty expensive at over $4000.  But if you like soccer more than hockey, it could be a really good option.  You just have to decide whether you want this for $4k+ or a regular Foosball table for under $1k.  I think that’s part of the reason it hasn’t came back before now, Foosball is more popular and probably hurts sales since it’s cheaper and in the same sport.

I’m hoping to play one of these eventually on location but I’m guessing it’s going to be pretty hard.  I don’t expect to see very many of these around, as Super Chexx games are pretty hard to find on location as well.

gameroominfo - December 24, 2017
36
It's not everyday you run across a vintage American Shuffleboard Company table, especially one this long.  This one has been in this basement for...